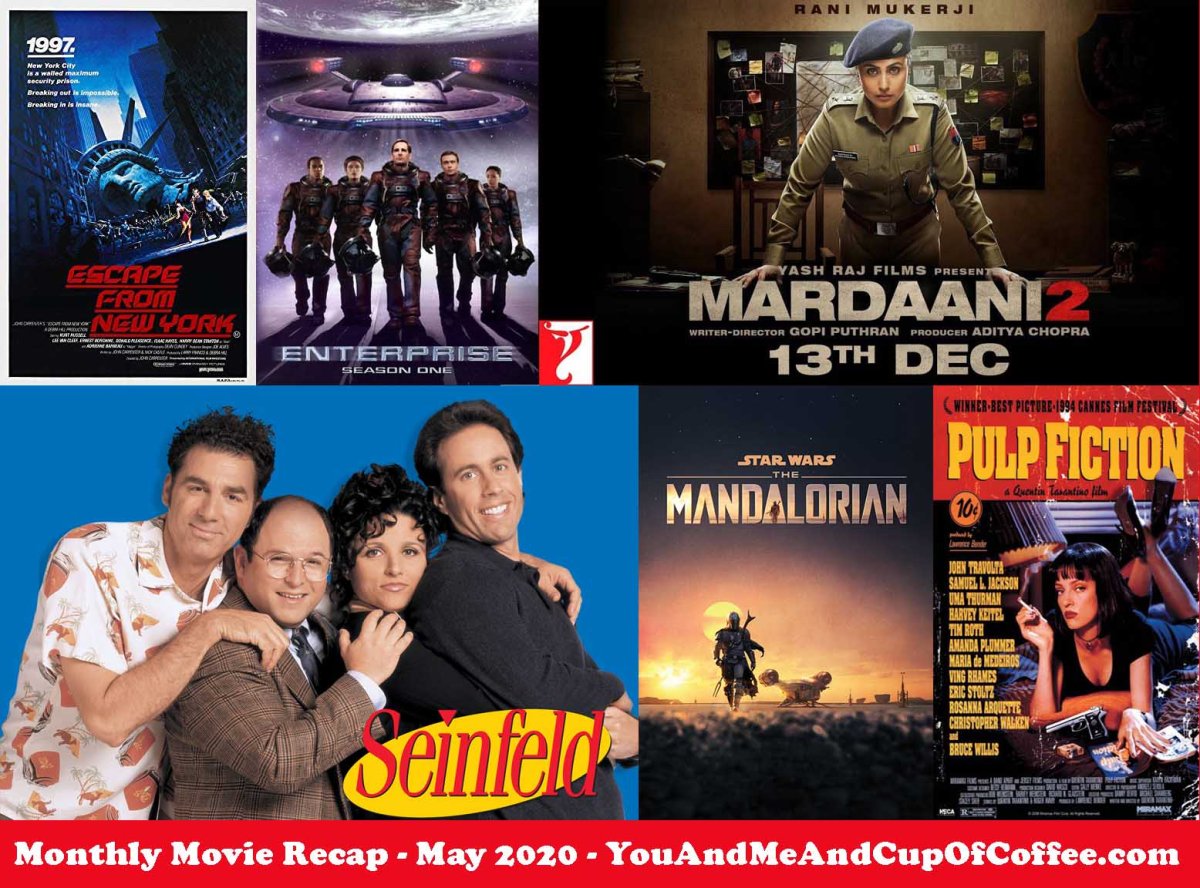 Hello and welcome! I’m back with my usual monthly movie recap. 7 movies and 3 TV shows, 2 of which are now my favorites. Let’s get started! As always, no spoilers!

Pulp Fiction (1994) – this month has started for me and my husband with an idea that we should rewatch old Tarantino movies because it’s been at least a decade since we’ve watched them. This movie is undoubtedly a classic and probably the best one that Tarantino has made. No need to go through the plot – you all probably know it, but one thing I’ll say for sure: sometimes it’s great to rewatch worthy films.

Kill Bill Vol. 1 (2003) & 2 (2004) – these movies didn’t impress me as much as Pulp Fiction. I’d say that the best thing about them is acting – Uma Thurman gave her very best to this role. I’m not a Tarantino fan at all, but these films have good pacing, well-written characters, and interesting cinematography. Surely, this director is known for repeating his movie ‘formula’ over and over again, but who can blame him for it if the movies are successful? I also found it funny how obvious his ‘formula’ is – Screen Junkies on YouTube made a hilarious video ‘Honest Trailer: Every Quentin Tarantino Movie Ever‘ which I definitely suggest 😊

From Dusk Till Dawn (1996). I remember when I was in my early teens, this was one of the movies that my parents didn’t let me watch on TV, so all I knew about it was something vague about vampires. This month I thought ‘well, let’s finally see what it all was about’ and boy oh boy were my parents right. I know this film gets all kinds of accolades like ‘the overlooked Tarantino masterpiece’ or ‘one of the most unexpected plot twists in the history of cinema’ but that’s not how I feel about it. Tarantino, as always, uses shock value and extreme violence because, as he once admitted himself, ‘it’s so much fun’. Well, to me it wasn’t fun – it was repulsive, heinous, visually ugly, and nauseating, and I felt like watching ‘The Incredibles‘ just to get this sh*t out of my system. It feels like the writers thought that shock value was same as good writing, but it never is. Liters of fake blood and intestines flying all over the place aren’t enough to make me go ‘wow’. Gore is effective when it makes sense in the plot (like in Event Horizon), but here it’s like two dumb ugly stories glued together and there’s no plot. As someone wrote about this f*ed up film, ‘this film is a great example of how sick minded people live in this world plus on top of that Hollywood makes crap like this & people praise them.’ Hard pass. Ugh…

Escape from New York (1981) – I can’t believe I haven’t watched this movie before because it’s so iconic! By all means, it can seem derivative now, but it’s because many movies copied various elements from it. This is an interesting phenomenon actually – great movies are forgotten over time and then considered derivative, even though they were the original to begin with. Overall, pretty cool action movie, I wasn’t bored at all.

The Mandalorian (2019) – after the glorious letdown that the new Star Wars movies turned out to be, I was quite hesitant to watch The Mandalorian. However, I was actually quite impressed with this show. I can nitpick and criticize every detail, but I won’t and for a simple reason – this is the best that could have been done. The authors needed to balance between the old, good Star Wars, and new SW that make zero sense and undermine the original saga, retcom the characters, etc. Overall, The Mandalorian managed to keep me on the edge of my seat every episode – it’s very dynamic, interesting, well-acted. It’s a success in my book!

Star Trek: Enterprise (2001-2005) Season 1 & 2 – this show is the reason why I haven’t watched anything else in May! We’ve decided to start watching Star Trek in chronological order (all I watched is the original series) and Enterprise is the first on the list. I was hooked up after watching the third episode and now we’re on Season 2 I still LOVE it! It’s dynamic, lighthearted, funny, and the acting of the main cast is brilliant. I hope it’ll keep the pace up because it’s quickly become one of my favorite sci-fi shows.

Mardaani 2 (2019) – as an aficionado of Rani Mukerji’s acting, I always keep track of her new projects. In my opinion, no Hollywood actress at this moment can come even close to her stunning performances in Black (2005), No One Killed Jessica (2005), Talaash (2012), Mardaani (2014). This movie is no exception. She is 100% believable in her role, the story itself is disturbing and heart-wrenching. Rani Mukerji is the right person to play the lead role – she is sincere, her anger and determination in her quest to solve gruesome crimes against women is palpable. This film isn’t meant to deliver 2 hours of forgettable entertainment – it’s written to make the audience think and feel, which I appreciate. I can recommend it if you enjoy crime thrillers.

Seinfeld (1989 – 1998) – this is one of my favorite sitcoms alongside Black Books that I watched last month. I rewatched several episodes from Season 1 this month and it was hilarious! Btw, I’ve discovered Seinfeld years after I watched Friends and noticed that some Friends episodes are almost identical to Seinfeld episodes in terms of plot. Anyway, if you haven’t watched Seinfeld and you enjoy sitcoms, then I 100% recommend it!

Have you watched any of these movies and series? I would love love love to hear your opinions and feedbacks!! As always, looking forward to reading and responding to your comments 💖

Follow You and Me and Cup of Coffee on WordPress.com